In 1987, the then Provincial Grand Master RW Bro the Rt Rev Vernon S Nicholls, expressed an ambition to open a number of new Lodges in the extremities of the Province. Living in Stratford upon Avon, he identified Shipston on Stour as a town that could support such a venture. He approached W Bro Clarence Davis, a prominent Mason from Stratford who lived close to Shipston in Tredington, and asked him to make enquiries to see if there would be enough support.

W Bro Davis contacted the Secretaries of surrounding Lodges (both in Warwickshire and also neighbouring Gloucestershire and Oxfordshire) and called a meeting in Tredington to gauge support. The meeting was well attended and it was decided to form a new Lodge. Bro.John Malin (the Secretary of Chipping Campden Lodge 5452) was asked to be the Secretary and Swan of Avon Lodge 2133 agreed to sponsor the application.

Many meetings were held, including a number between WBro Davis, Bro Malin and VW Bro John Hamill PGSwdB, the Librarian at Freemasons Hall, to decide how the Lodge should be instituted, also a suitable venue was also needed; as there was no Masonic Hall in the town. The local school was considered, but proved to be impractical. Townsend Hall was finally chosen and it has continued to be the home of the Lodge to this very day. The Lodge furniture came from a variety of sources. The Master and Wardens pedestals were made by one of the Founders W Bro Robert Lyall, one of the Founders. Both the carpet and Organ were a gift from Chipping Campden Lodge. The Warden's columns and the large Tracing Board  from Viator Lodge (via the first Treasurer W Bro.Reg Smith).

The Consecration of the Lodge was held on 17‘ May 1991 at Townsend Hall, attended by over 200 Masons and presided over by the Provincial Grand Master, his Deputy (VW Bro John Saville PGSwdB) and a full complement of Provincial Officers.

In view of the work he had done to get the Lodge off the ground, W Bro. Clarence Davis was appointed the first Master of the Lodge. As a new Lodge needs an Immediate Past Master, the Past PGM, W Bro. Thomas A Wood was asked to join the Lodge and fill this role, which he did before taking on the role of Tyler (the only Lodge Office he had never previously held). The two Wardens were W Bro Frank Chatwin (SW) and W Bro Bill Fox (JW).

The Lodge flourished in the early years with a steady stream of Initiates and Joining Members. The first Initiate was Bro Charles Alexander Lobban, who was initiated at the first Regular Meeting. The first Initiate to be installed as Master was W Bro Peter King in 1999.

A Banner (see below), donated by W Bro Bill Fox, was dedicated in 1996. Visiting Lodges have included; Lodge Glittering Star (hosted on three occasions), the Sutton Coldfield Masonic Circle Demonstration Team and the Black Country Demonstration Team. These special meeting have always attracted the support of a large number of visitors, many of whom have become regular visitors and true friends of the Lodge and whose support is greatly appreciated.

The Lodge celebrated its 25th Anniversary at a Special Meeting in November 2016 and continues to grow from strength to strength.......Here's to the next 25 years! 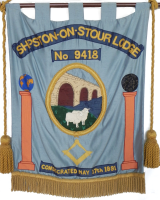